Battle Report - May 1942; Southeast of the Jomard Passage


May 1942, Southeast of the Jomard Passage, Coral Sea.

After a night of bad weather the morning breaks for the carrier Shoho and her heavy cruiser escort. The original fleet composition of four heavy cruisers and destroyer escort has been thinned during the activity of the past evening and night. Kako and Furutaka have been detached to support the port Moresby invasion fleet who have reported an enemy fleet approaching them, possibly containing enemy heavy cruisers. The destroyer escort is close by after having investigated an alleged submarine contact during the night; thus, the Shoho, escorted by the heavy cruisers Aoba and Kinugasa are awaiting further orders in anticipation of the Port Moresby invasion.

Suddenly, as the weather clears the Japanese scouts report an enemy contact to the south: capital ship, small escort. It seems the Americans have suffered from the same bad weather during the night, scattering their forces. Further reports confirm that it is a Yorktown class fleet carrier, escorted by two destroyers. Seeing a window of opportunity, the Japanese Rear-Admiral orders a course-change towards the reported enemy position. If the Americans can be caught by surprise, a great victory can be won!

No, I haven't switched games :). But since Naval War also includes air strikes, carrier battles and air combat, it was about time I looked into getting some plane miniatures.

Second criteria would be availability and third would be cost.

It isn't easy to make your own miniature naval game. Tremendous amounts of work go into the ruleset itself, but if you want to be able to show the game to anyone you will need a full-blown demo setup. This does not only mean having all your gaming aids, dice and rules nicely done and ready, but also means that you will need to be able to field most of the units in the game, pretty scenery and a nice table surface.

Getting the fleets done is an ongoing process that will probably keep me busy for the years to come. My Britisch and German fleets are pretty extensive by now, so I can field most builds from the Norway OOB. Getting the US and Japan going is the next thing on the list, with Japan being about half done now, still requiring some carriers and the odd battleship and cruiser to be painted.

My US navy though is in need of a serious building program (Late to the scene as usual USA?). First trip is to my War at Sea box to find anything that is pretty enough to be aquired for the Demo-fleet. Found Yorktown, Lexington (alas with the prewar deck configuration), some DD's, but that's about it (my War at Sea collection isn't as extensive as some of the collectors out there, but I'm also pretty critical about what constitutes a good enough sculpt to be repainted for the demo fleet), so off to shapeways we go.

So far so good, I must admit that although expensive, I really love the Frosted Ultra Detail Shapeways prints:

How to make a table look pretty

Well, not many updates on my blog lately, but I sure have been busy nonetheless.

Making a game suitable for demo's involves more than just getting the rules correct. One of the major aspects of getting people interested is giving the game some 'presence' on the tabletop. This gets increasingly difficult when your scale gets smaller. It's easier to make a 28mm game stand out on the tabletop than a 6mm game, but naval games in my opinion take the cake in difficulty to stand out.

I mean, your scenery is mostly just water, your ships miniatures are very small compared to any other miniatures out there and most of the 'action' is in the roll of the dice.

I'm really on a roll here, these ships took some more time because of the wooden decks which required some more detailing. 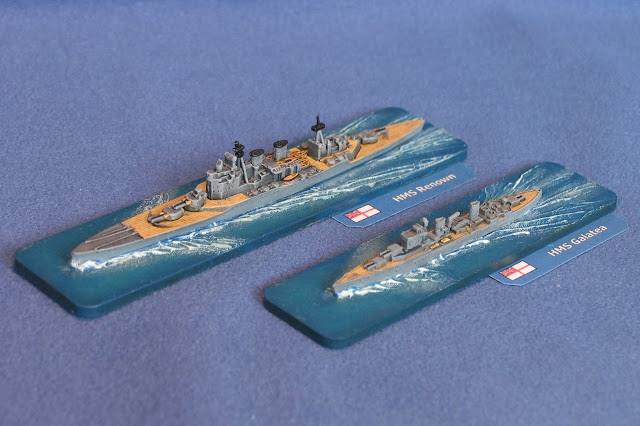 Last week I finished up most of the IJN ships I ordered from Shapeways: 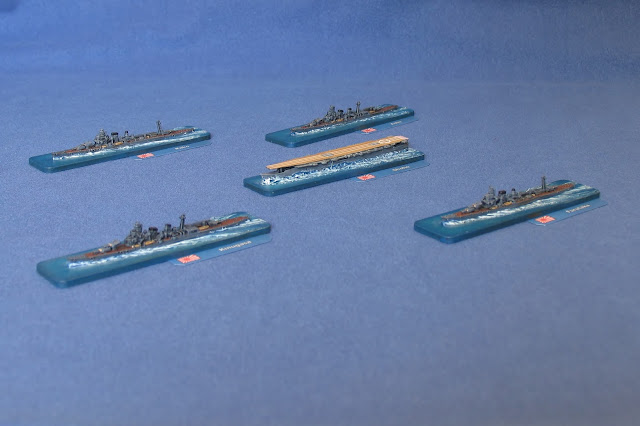 So, finally it has come to this point… I’m proud to be able to present to you guys the outline of my own WWII Naval ruleset: Naval War

What kind of ruleset is Naval War? Why is it
different from other rulesets?


Naval war is a fast-playing, action packed wargame that will really blow you away… ‘wink’


...Right, now that we’ve got that over with and further trying to avoid the compulsory superlatives, let me take you on a cruise down the ruleset so you can make up your own mind about what makes this game unique:

So, finally it has come to this point… I’m proud to be able to present to you guys the outline of my own WWII Naval ruleset: Naval War ...